Coupled with Thanksgiving, yesterday’s Independence Day marked the second day where I, without a doubt, would rather be in the U.S. than here. But that’s all okay, since there was a performance night at my dorm and people were partying. I also had a paper to write, and that can be done here as well as there if I can’t go out anyway. 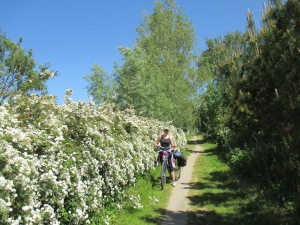 July 1st marked nine months in Germany. Ignoring the possible metaphor I could set up with conception and birth of a baby, let me just reflect a bit on what this means. First of all, it means 10% left. November 2014, I wrote a post about my first month here, and the things one should have done during one’s first month studying abroad. I noted how weird it is to divide one’s time into sections and grant it value based on which section it was, but I stayed true to my word and managed to metaphorically put the last eight months into one dazzling piece of uncut, multifaceted mineral. I did a lot of very exciting, life-affirming things, had a few rough spots (it ain’t living if it’s perfect all the time), and overall really enjoyed myself while being here.

However, 10% is the image on my TomTomRunner when I’ve set myself on course for a goal and I have 10% left of the time or distance I set out for. Usually at this point I kick into a high gear and elevate or hold through the end of the race. I suppose that’s kind of what I’m tempted to do now, with one month left.

I’ve got the academic end covered, with a hectic week of presentation, term-paper, and exam to complete. Once I’m left gasping for air on the shore of the first academic break I’ll have since Summer 2013, I’m going to take care of the last things on my list-a list I created for myelf, based on the suggestions of dozens of well-meaning Germans and people who know Hamburg, when I first got here. I still want to do some sort of water sport on the Alster, even if it’s just to paddleboat. I still haven’t been to the Heidepark (a sort of amusement park) yet, and I want to visit the Auswandere Museum. Seeing as I wrote my thesis on migration narratives, I think I should visit the museum that dedicates itself to the documentation of one of the largest points of migration in Europe.

That’s about it, though. I’m open to other suggestions, but I can honestly say that I think I’ve really taken advantage of the opportunity to live and study in Hamburg. That is not to say that I don’t notice or learn something new about the city everyday. Yesterday, for example, coming back from my run, I noticed the General Konsulat for South Korea. I’ve run past it at least four times a week for the past nine months, and the building is so inauspicious that I never noticed it until now. Things like that are welcome surprises. I also am in love with the roses in bloom all over Hamburg.

I’m trying to come up with some good things to talk about to close out the year here… but I’ll save those for after finals.

Hope everyone has a good week!

I’m starting to think that I only need one site, not three. The problem is, I will probably annoy everyone who subscribed to my other blogs (running and reading) just to read about those things. However, I’m getting to the point where I don’t care, especially for this post, since it is the juncture where Hamburg study-abroad meets my running passion: the Hamburg Marathon (more on that later in the post). In reflection, all my passions juncture with one another and I think I may be more successful (a term I define for myself in this context as reaching as many readers as possible) if I consolidate all my writings into this one blog to create a better platform for me to express myself.

I’ve been doing a lot of reflection lately. There are creative writing projects blooming in my notebooks and I am about to complete my third marathon after a two year injury-healing cycle. I consider today a little like the day before my birthday, the night before Christmas where the anticipation slowly builds for what the next day will hold.

This poem from goneforarun.com comes to mind: 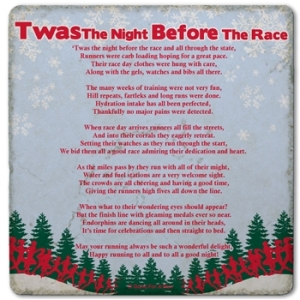 Tomorrow, April 26th, while many runners will be getting ready for the London Marathon, I’ll be starting in Hamburg’s 30th annual marathon.When I signed up back in December, I knew I was heading into something big.

However, as January saw me plagued by bad plantar fasciitis in my right foot, and January and February were struggles to the death with my MA thesis, training fell to the wayside. I was still running, and I tried to get in at least 25-30 miles a week, but I wasn’t able to get long runs in.

Then, as the thesis fog cleared and my feet itched to get out, I slowly got into serious marathon training. The first few days in March I spent researching whether I would even be able to train in time (less than two months), but I decided to just get started and see how far I could get.

As opposed to the last two marathons I started training for, but got injured during training, I did not follow a plan and was extra attentive to the signs my body gave me. This time around, I also had a foam roller, ice packs, regular cross training, and orthopedics in my regular day-shoes on my side.

It was a bit of a (read: a huge, what was I thinking?) risk jumping from 12 to 20 miles in five weeks. However, I only took the risk because I needed the confidence boost. Since then (two weeks ago), I have been extremely careful (ha ha, not really… soccer game last Sunday?), and very laissez faire. This past week, I’ve been feeling a bit run down, and I did not expect differently. I skipped the run I wanted to go on Thursday, and feel better about that decision. I realized at that point that pushing myself out the door was not as wise as just laying back to put forth my efforts tomorrow. 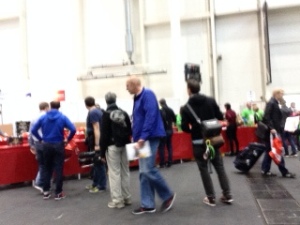 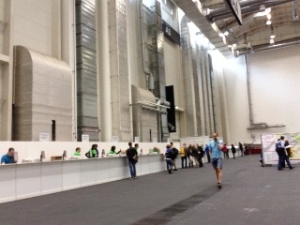 It may be difficult to tell, but the row for the men to pick up their packets was twice as long as it was for the women (at the end).

Gah! Tomorrow? Yup, tomorrow, I run a marathon. Yesterday (Friday) the expo opened. Being the impatient dork that I am, I made sure to get there right away.

The best part about visiting a race expo in Hamburg is that I get to see two important corners of the city: the convention center (Messe) and the famous park (Planten und Blomben) that borders it. (the pictures I took were with my iPod,  Excuse the crookedness, please! 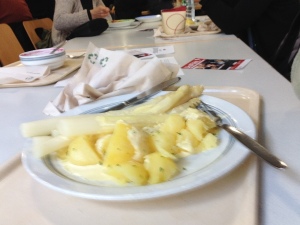 Fueling with white asparagus (Spargel) in the days leading up the race. It’s a customary German dish with potatoes and hollandaise sause (that has nothing to do with Holland) 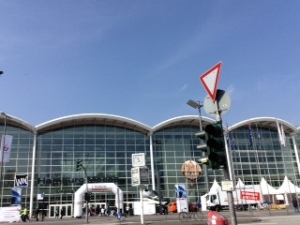 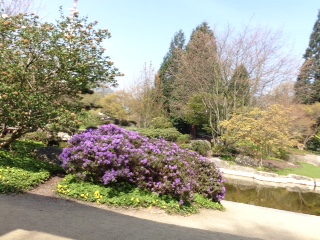 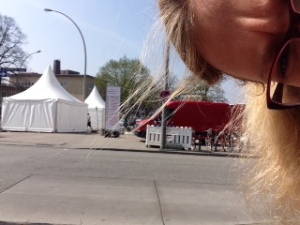 Some beautiful forehead wrinkles and tents set up for the race

I met up with a few fellow soccer players at the expo, saw a girl who is going to the U.S. next year through my same program (two VDAC students will be running!), and exchanged some nervousness.

Also, I was interviewed with the others by a German TV station (SAT.1). Who knows if they will use that excerpt? But how cool is that?!

Finally, I spent yesterday and this morning getting some excellent German carbs in my belly (if I do well tomorrow, then it’s only because German Broetchen are the best in the world).

One thing the Germans don’t do as well however, as I noticed yesterday, was that they don’t give away as many free things. The expo yesterday had one table with free alcohol-free beer (not bad stuff) and a table with free tasters of Cliff bars (I noted how US products appear and are promoted in German spaces), but otherwise the pickings were fairly dry. I’m too excited by other things to spend a lot of time thinking about that right now though. I just thought I’d note it.

In conclusion, I feel fairly well-prepared for tomorrow. I am very excited that there are many of my dorm-mates who will come out to support me, and that this time tomorrow I’ll hopefully be finishing (reach goal is 3:45). One obstacle I’ll still have to overcome is that I’ll have to think in terms of kilometers rather than miles! Geez… 42 sounds much scarier than 26.. but it is what it is. Cultural experience number five million.

All the best to anyone racing tomorrow!

Tl; dr: I am a little kid, anxious for race day to get here because I’m excited about all that it promises to hold. Also, I am merging my blogs. The end.