Although, as I’ve mentioned, the week here doesn’t “officially” start until Thursday, it doesn’t make getting up Monday morning any easier. However, it helps to have the obligatory lecture to get one out and ready long before noon.

Today I visited a lecture on colonialism and anti-colonialism, a history with which I am fairly familiar, but can always use a brush-up, especially by scholars who have devoted much of their careers to researching and understanding the topic. It’s a bit surreal to talk about British imperialism and colonialism from within Britain, whereas I’ve always talked about it from an outsider’s perspective, either the U.S. or Germany. I also visited two talks in a research group I’m participating in (on Nationality Construction and Identity, I think you can kind of start to get an idea of what I’m interested in for my PhD). They were in Gonville and Caius College, and I’ll give you three guesses on how to pronounce Caius. Much to my surprise, this is the “Gonville and Keys” everyone was mentioning my first week here. Why “Caius” is pronounced like those things you use to get into your car or front door has to do with the vanities of an Englishman from the 17th century. It’s not a lot different than Hyacinth Bucket trying to get others to call her Mrs. Bouquet in Keeping up Appearances, mind you.

Name aside, the college is old- almost as old as Trinity. And maybe even more beautiful because of its relative smallness. 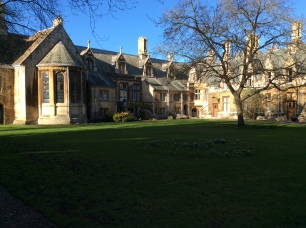 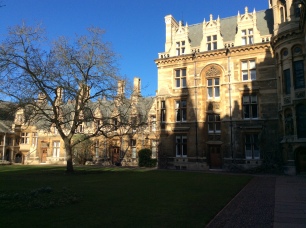 And today helped me begin to understand why Noël Coward sang “”Only Mad dogs and Englishmen go out in the midday sun.” Since being here, I’ve only properly seen the sun twice. One of those times was today- and oh, what a sight. It made me want to stand in its full strength and just let it warm me up- which, in 3 degrees Centigrade is quite a feat. It also made me want to take pictures of places I’ve been talking about: 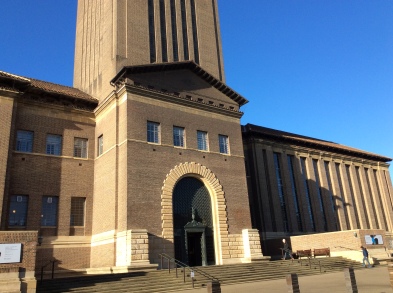 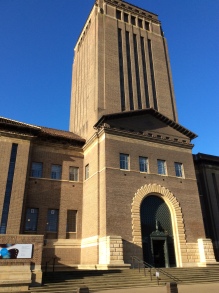 The University Library, lengthwise and vertically to try and give an idea of how impressive this building is.

The river Cam, with a few people getting punt rides (I’ve yet to go on one of those- or do rowing, for that matter) 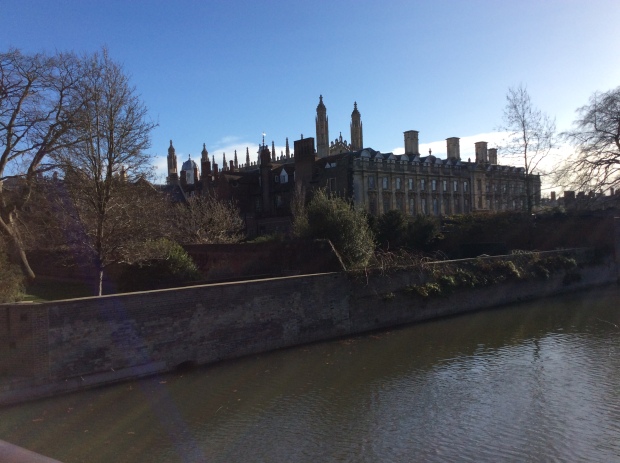 The back of Clare College

The crazy thing is, these sites are all within 5 minutes of one another.

For dinner I had reheated noodles with pesto and cheddar cheese, so that pretty much tells you how exciting the rest of my day was. I’ve been here for two weeks now! So, I think one can say I’ve pretty much moved in.

Side note: I will reply to the comments to yesterday’s and today’s posts tomorrow! I just wanted to get this post out on its proper day, but I really should be finishing something else first. Thanks for your replies, though! I do appreciate them.