It’s taken me longer to publish this post than most. I think perhaps because it’s a more difficult topic than my usual cultural observations and fun-time running. It’s also about someone who only recently died, and I’ve always taken a while with paying my respects.

I also realized that the longer I waited and the more I read other news and opinion pieces this week, the less I had to add except, perhaps, the European perspective. So I’ve decided to focus on that as well as a handful of personal notes.

A few days before Senator John McCain’s family shared the news of his passing, I came across an article in The New Yorker. Being a liberal literature nerd [1], it was the title that caught my eye: “John McCain and the End of Romantic Conservatism“. Benjamin Wallace-Wells made me aware of McCain’s role in the senate following Trump’s election as well as his cancer diagnosis and his role in the Vietnam War. I know this seems ill-informed, but I was too young to acknowledge McCain as the 2008 Republican nominee in 2008, and I hadn’t really had reason to read up on him since. Even now, despite my interest in POWs due to another observation in my immediate surroundings [2], I read this article, thought, “hmm, I didn’t expect that,” forwarded the link to my Dad, and didn’t think too much else about it.

Less than a week later, the U.S. flags were all at half-mast.

Photograph by Ludovic, featured in the article

The Romantics (and here I mean those involved with the literary and art movement, not the band) celebrated independent spirits and the subjective interpretation of the individual.  Wallace-Wells calling McCain a romantic already set the precedent of what to expect: a Lord Byron type figure coming from established nobility but going off to fight for what he thinks is right (at the time, some war of the Greeks) and dying in the process. This is a bit extreme, but McCain did leave behind a void to fill in an extremely partisan Congress that now needs another romantic hero to cross partisan lines and fight for the people, not just the party.

McCain has been called and called himself a maverick. Of course, he was unorthodox and independent in his actions. He was willing to put himself at odds with his own party and reached across the aisle on several occasions to push for action on issues like campaign finance reform, climate change and immigration. This, for him, was the definition of being a Republican. In his last appearance on the Senate floor to oppose the 2017 proposed Health Care Act and call for more work on the bill before it could be passed, McCain described what he saw as his task and that of his fellow senators. Speaking of senators of the past, he [3] pointed out that

however sharp and heartfelt their disputes, however keen their ambitions, they had an obligation to work collaboratively to ensure the Senate discharged its constitutional responsibilities effectively. Our responsibilities are important, vitally important, to the continued success of our Republic. And our arcane rules and customs are deliberately intended to require broad cooperation to function well at all. The most revered members of this institution accepted the necessity of compromise in order to make incremental progress on solving America’s problems and to defend her from her adversaries.

Collaboration. Cooperation. Compromise. What has happened to communication and trying to come to agreements in Congress? It’s now big stick ideology without the soft voices. I connected to McCain’s type of heroism in the political arena- without forgetting  the military heroism that he is remembered for as well. His willingness to go against the established norms and conventions of the current political positioning and to oppose Trump, and in turn much of the party aligned with the president, would, of course, win me over.

And not just me. In the days following the news of his death, McCain was remembered not just by the United States media, but also in European countries like Germany.

A freeze shot from the Heute news report from ZDF, one of Germany’s state television channels on 26 August 2018 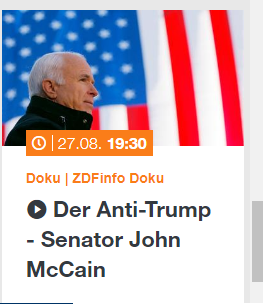 It’s not often the German news has prepared tributes (you know, the archives of narrated collected video clips about VIPs available for broadcast without too much preparation in the case of death) for more minor (relatively speaking, of course) politicians like US senators. Yesterday, ZDF news reporter Claus Kleber explained some of this interest by comparing a US Senator to a Bundesminister, a member of the federal cabinet. The it’s a bit of a stretch, but I’ll let it pass because McCain was arguably more than just a senator, and I guess if anyone honors romantic heroes, it’s the Germans (in case of doubt, see Schiller). But the tribute made it clear that McCain came on the radar for his stark contrast to Trump as well as the other reasons he’s mourned by the nation.

In between news of their own democratic crisis: the rise of neo-nazism and xenophobism in cities like Chemnitz, the German broadcasters delivered the news of McCain’s death as well as his funeral, noting explicitly Trump’s exclusion. However, one should emphasize McCain’s idealism, which meant he would stand up for what he thought was right, even if it meant going against the man holding the highest office, officially his commander-in-chief. 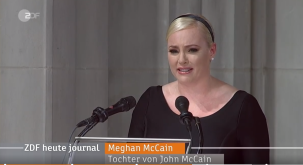 The broadcast featured several snippets of the eulogies

McCain’s deepest idealism, which he reserves for NATO and the defense of the West, is not much shared in the Republican Party now, subsumed as it is by Trump and nationalist retrenchment.

It’s McCain’s idealism that may likely have come from military service and even before. Very likely also being raised by strong woman. And it’s this kind of character that I actually associate with Republicans versus Democrats; the ability to have values and stick to them, no matter what, is sometimes both extremely infuriating and incredibly admirable. But this kind of adamant value-holding is only good if one examines one’s values and puts them to the test. The ultimate test may be: with these values, am I treating others the way I want to be treated? McCain’s is a similar character I see in my Dad, who went to the same high school (albeit twenty years later) that had the honor code:

While I am a bit hesitant about the ethics of reporting other students and believe that later one learns that it is sometime more honorable to understand the system being upheld and know who to and when to report something, the ability to uphold an honor code is the important part. And McCain followed this code of honor to the best of his ability throughout his life, even while in captivity. In fact, when one asked him about his time, McCain would mention his own faults- stealing someone’s washcloth- as much as what the Vietnamese did wrong with POWs, even though McCain would be the only one who would judge him for it. It’s the foundation for the character that made him refuse to be released from the Hanoi POW camp out of the order in which he was captured. This is part of his heroism. But not all would agree.

“He’s not a war hero,” Trump said, early in his Presidential campaign. “I like people who weren’t captured.” (Wallace-Wells)

Trump’s logic that being captured is not heroic is based on his incomprehension of what it means to survive the capture or refuse the opportunity to be released earlier- no less, what it even means to be in a position to be captured to begin with- that is, what it means to be willing to lay down one’s life for one country.  And yet, surprisingly, Trump’s approval rating continues to remain higher with veterans than with the general public a year after his election.

It makes me wonder about the contemporary US voter and what’s important to people.

I didn’t intend to bring up the Midterm Elections when I started this post, but McCain’s passing occurred within the same week at the Florida, Arizona and Oklahoma primary elections, and of course the rather solitary Wallace-Well’s article has been joined by a lot more writings. Those who continue to approve of Trump and anything he does think that there’s a lot of “fake mourning” going on for McCain, especially from liberals. This does not surprise me, but it does continue to sadden me. I think anyone who mourns McCain’s passing mourns a man who had character, served his country in every way he could, and did a lot of good for the people of Arizona and the US.

While John McCain stood for integrity in leadership and bipartisan politics, Aretha Franklin stood for women’s and African American rights. The funerals of both these people within the past week have provided spaces to openly discuss simmering issues within US society and politics. Why do we wait for these symbolic figures? It only makes sense if we intend to continue the work they began.

What are the ways in which we can still do something powerful when Twitter comments overrule one another by the millisecond,  when partisanship has ruined communication on Capitol Hill and we have one of the most contested presidents in history? We can vote. It’s not the only thing we can and should do, but it is one thing.

With the Midterm Elections and the death of McCain, the vote is out on who can be the romantic hero McCain was. But my primary hope, for now, is to find people to vote for who can play nicely with others- be that Republican, Democrat or other.

In the words of McCain:

What have we to lose by trying to work together to find those solutions? We’re not getting much done apart. I don’t think any of us feels very proud of our incapacity. Merely preventing your political opponents from doing what they want isn’t the most inspiring work. There’s greater satisfaction in respecting our differences, but not letting them prevent agreements that don’t require abandonment of core principles, agreements made in good faith that help improve lives and protect the American people.

Florida, Arizona and Oklahoma had their first chance to find those willing to try to work together at primaries Tuesday; the midterm General Election is on November 6th. I’ll be in Germany again, but you can bet I’ve got the mail-in ballot ready.

Related posts:
US civic duty while across the pond
A little bit of democracy: Election Season

[1] really nerdy would be to point out the recognized romantic conservatives in the literary world, the Inklings.

[2] These past weeks back in south Florida, I became aware of the National League of Families POW/MIA for the first time when I  noticed the flag flying in my neighborhood and along the route I use to get to uni. Turns out, Federal Highway, or United States Route 1 north from Key West, Florida, to the border with the State of Georgia is part of the routes designated with the POW/MIA Memorial Highway Designation Act  in 1995 as a POW and MIA Memorial highway. The reminders are fitting. These men and women should not be forgotten.