Something I forgot to mention in my post from yesterday, is that in the award speech for the movie Fortuna (if memory serves me correctly), Martin Luther King, Jr. was quoted.

I wanted to actually make two comments about this.

There’s more to be said about the relationship between light and love. Both are positively connotative, imbued with hope and goodwill. That’s not to say that love cannot be selfish, and light is always the goal. Pure light rarely exists and most of the world is a series of dark flecked light. However, to sit there in the Haus der Kulturen der Welt and hear these words, first in German translation, then in the English original, was pretty great.

The director of the Berlinale Generation section liked the quote so much that she read it at the end of the ceremony again, before the two winning movies were shown. How I could forget it when writing my post yesterday, I don’t know. But I remember now.

It’s moments and memories like these that stay with one.

Also, finally, the Berlinale Generation awards are nothing like the Oscars- too much pomp, ego, and money is part of the latter’s choices and ceremony.

About a week and a lifetime ago (every week is a lifetime when on a break from normal routine), I just finished attending the Berlinale. As previously explained, there are various sections of the Berlin film festival, and I attended mostly the Generation 14+ movies with a K+ Awards ceremony thrown in. It’s not that I’m not ready for the “adult” movies yet. It’s mostly that the Generation section movies are easier to coordinate and attend. And honestly, they’re not any less demanding of empathy, understanding or ability to feel sad. This year, I saw four 14+ movies: 303, which I mentioned last week, Kissing Candice, High Fantasy, and the winner of the 14+ section: Fortuna. Of the four, 303 and Kissing Candice were more about growing up and becoming an adult. However, Kissing Candice, an Irish movie with a sub-plot about a gang of unruly, drug using, violent boys, also already crossed the border of entertainment into political commentary- which is what High Fantasy and Fortuna definitely were.

Before I continue, I should mention that I’ve always been weirdly involved in politics. Perhaps my transnational heritage caused me to question the point of nation, and therefore of state, and therefore of borders and therefore of what happens within those borders, etc.. But despite my degrees in literature, I’ve visited my share of political seminars and my PhD project is actually a weird intersection of literature, media, and politics (aka cultural studies) and so I consider myself qualified to talk about politics. Also, as Percy Bysshe Shelley proclaimed, “Poets are the unacknowledged legislators of the world,” so who knows!

I know that you are probably rolling your eyes right now. It’s okay. I roll my eyes at myself a lot too.

Anyhow, as far as Berlinale goes, my favorite movie was High Fantasy, a South African movie questioning the success of the “rainbow nation” and highlighting contemporary tensions in race politics and discrimination. It wasn’t just the topic that had me on board. I just really enjoyed the story, how the characters switched bodies, and the nod to 80s style sci-fi a la Stranger Things. Race Politics and the way People of Color were treated in South Africa through the 90s did not disappear with the end of Apartheid, of course. We see this in the USA too, and here we supposedly ended segregation decades earlier. On top of continuing tensions between People of Color and Whites in South Africa- showcased in various high profile events and protests in the past few years, there is also an increasing awareness of LGTBQ+ rights. So where do these issues find an audience? In front of the Berlin 14+ audience. Unfortunately, the movie has yet to be screened in South Africa, but maybe building up a portfolio of positive responses elsewhere will give director —- the strength (and financial means) to show it in South Africa and perhaps even get action-inciting conversation going.

Similarly political, but closer to home, was the movie Fortuna. Chosen as the winner of this year’s 14+ section for the Berlinale by both the international and public jury, Fortuna was honestly one of the most difficult movies I’ve seen in a while. It wasn’t terribly traumatic or tmi. Rather, it was just painfully slow. I’m sorry that I say that like it’s a bad thing. I’m definitely a fan of artistic movies, and agree I that we don’t need fifteen shots in just as many seconds and that the Hollywood combo of comedy and action just grates the sensibility to finely shredded stinky cheese. However, some humor is needed. And while the black and white cinematography was aesthetically beautiful, and the close shots of two men having a conversation for 15 minutes quite, well unusual , I was finding it hard to focus.

The story revolved around a 14-year old refugee from an African country and her fate- specifically, her ability to chose her fate (Catholic faith and questions about abortion played an important part in this movie). She had been sent to live in a Swiss convent led by a group of well-meaning, but perhaps unprepared monkish type men. The movie, despite having some artistic merit, clearly won due to its attempt to take on the socio-political topic of the decade- refugee seekers in Europe. The focus on an individual and her fate as an unaccompanied minor, as well as all the Swiss government beuracracy and the humanity in the face of inhumane forces (none the least an icy-coldness that I could feel in my own bones, despite the fact that it was only an audio-visual representation) maybe is what won. I don’t know. I can’t judge the 16 movies that were up for selection, but I felt that the other movies I had seen had just as much merit- if in different ways.

But oh well. That was that. The 14+ section also featured some great, slightly politically involved movies. The short film that won was Field Guide to 12-Year Old Girls, an Australian movie that I could relate to and enjoyed, and the feature film Les Rois Mongols (meaning “the idiot kings,” awkwardly translated in English as “Cross My Heart”). This movie wasn’t as political as the 14+ section films, even if it included some Quebecois left-wing politics and French versus English Canadian identity. However, it reminded me of the need children have to be included in decisions concerning family, and of their need to be taken seriously. They can understand more than we give them credit for, and that should never be underestimated, it looks like.

So there you have it. Berlinale. Four glass bears awarded and I am 7 great movies richer for it.

Moving on, I also took a few hours of my Saturday (after a long run, before the K+awards ceremony) to pop into the Kennedy Museum (after spending an hour to discover that this wasn’t the same as the Kennedy Haus) and visited the photo exhibit of Pete Souza’s selection of photos taken during the Obama presidency. 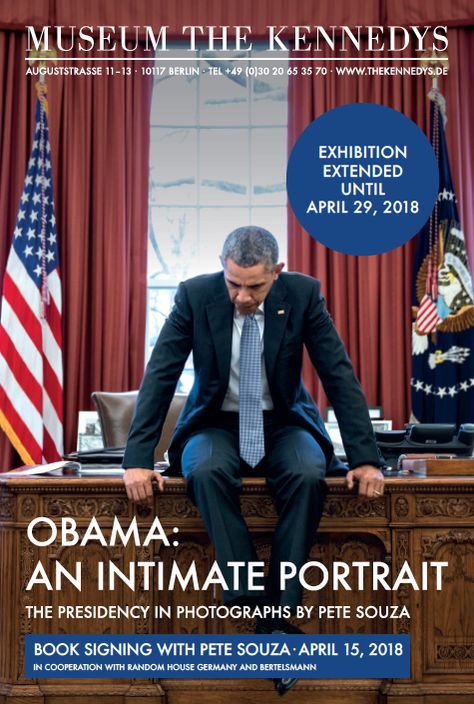 An exhibit for Obama in the presence of a permanent exhibit about John F. Kennedy was no coincidence. Both had a special and curated relationship with the people via the media, and this much can be seen in the photos taken of both throughout their presidencies. I personally am guilty for letting my impression of Obama take over my feelings about his political actions while in office (and afterwards). For me, he presents one of the most intelligent, upright characters that I know. This is, of course, based only on what I (am able to) know about him, but I also hope that my opinion of him is never shattered by some news about what he did in office or afterwards.

At any rate, many Berlin fans will know that Kennedy once gave a speech in West Berlin where he states “ich bin ein Berliner” (I won’t explain the joke that Kennedy called himself a donut- you’ll have to look that up yourself), and the visit from which this speech came endeared Kennedy to the hearts of many Germans, and hence a whole 100+ sq. meters dedicated to the man in one of Berlin’s more expensive corners. It’s a pretty well put-together museum, and I enjoyed my hour there. I can advise it- but only if you’re not allergic to politicians and photos.

And thus endeth one post, with plans for the next one to cover a trip I took to Duisburg and Den Haag.

As a small preview: small Blaumeisen, which are now my favorite birds. Yellow breast and blue heads and feathers. You can’t really see it here, but it’s still a nice photo, I think.

okay, in reference to the post title, maybe not everything…