Hello there! I wouldn’t be hurt if you forgot this blog existed. I kind of forget that myself too, sometimes. I tell myself, if anything, at least I’m posting at least once every calendar month. I’ll try to make up for quantity with quality!

Where to begin? September in Berlin was surprisingly mild and sunny, and this carried on well into the month of October. Being quite more comfortable than July and August, where temperatures were well above 30 centigrade, everyone was happy about the weather except the flora that just didn’t get enough rain. However, as the month wore on, the leaves changed colors, the sky got darker earlier and now a few rain days have refreshed the last bits of green around here.

October saw another celebration of the Germany reunification 29 years ago. And while I didn’t know that each year another German city hosts the nation for a week of celebrations, I figured it out this year since Berlin was the host.

The Strasse des 17. Junis basically went from one event prep to the other as just a week prior to this, the Berlin Marathon happened, which saw the world record broken once again (7 times in 15 years!) by Eluid Kipchoge. Just a few days after the Unity Day celebraations, the lights and projectors were set up for the Festival of Lights that happens here yearly. I posted more extensively about this the first time I saw the different exhibitions two years ago. 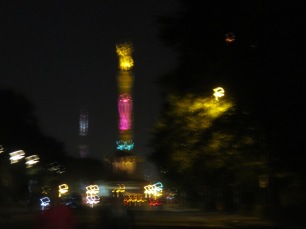 let’s pretend this one is just artistic licence

A week into the Festival of Lights (it went from 5-14 October), there was also the massive demonstration of solidarity with anti-rightwing extremeism, inclusiveness, and anti-racism in Berlin, the #unteilbar Demo. For academic reasons I missed most of the demo, but I was able to participate in the last hours.

So, basically, the Strasse des 17. Junis is open for the first time in over a month. I’m sure Berlin’s car commuters are relieved about this.

Other than riding up and down the street on my bike for the various events/ activities, I also crossed a major goal off the bucket list and ran in one of the most (in)famous stadiums in the world.

From this, it looks like my smiling self is leading the pack. Not shown: quite a few people who had already made it around this turn of the track.

The Berlin Olympic Stadium, built for the 1936 Olympics, was one of Adolf Hitler’s showcase projects before he started WWII (a very offhand way of putting it, I know. I’m sorry). Jesse Owens famously won four gold medals there in 1936, becoming a game changer much like Usain Bolt, who broke the world record here in 2009.

Fun fact: my brother and I were out on a run once during that summer of 2009 and were able to sneak into the stadium to see the 300m hurdles, because we looked like we were participating athletes. I’ve also done the official hosted tour of the Stadium once or twice. However, I’ve never been able to run on that famous blue track and so when the opportunity came through the European Association for the Study of Diabetes to run a free 5k on the Olympic Stadium grounds, I kind of hoped this would include the track. And it did! And now I can say I’ve run on that track like the exceptional athletes before me.

Finally, to round out the last interesting news from Dorothea in Berlin, there are various literary events happening all over the city on almost a daily basis. It’s almost more exhausting to figure out what to do than to get ready to do something, and my priorities have shifted a little from exploring to writing, but there are still opportunities to join the Friday night revelers in Kreuzberg, Neuköln, and the like, to think about the ways the city is changing. Shifting resources, shifting demographics, the city is constantly changing and sometimes, a bottle of beer in hand standing by the exit to the last station on the line, watching the people come and go to catch the connecting buses or grab a garlic-sauced Döner, thinking about the days behind me and the days ahead, I can just feel myself changing too.