Cambridge loves its acronyms, and this one stands for the university-wide Cambridge (cross country) running club: The Hounds and Hares. I’d scoped out this group already in April last year when I found out I was coming to Cambridge, and one of the first things on my list since arriving was joining a group run. The captains of the men’s and women’s teams put out weekly running meet-ups and they were quite easy to email with, but the group is incredibly competitive. Last Sunday when I went to meet-up for the group run, I was left behind within the first mile, getting too lost to ever have a hope of catching up to the group. This Sunday, I came with a little more speed and gumption, and the course was more straight-forward along the Cam river, so I managed to not quite stay with the main group (who went out for 12 miles at 7mpm or faster), but I managed to stick to the smaller group that went 8 miles at a more reasonable pace after losing the main group (it was still around 7:40 mpm). Needless to say, being at the back-end of a pack of runners and still doing sub- 7mpm was a huge slice of humble pie. It was a definite character builder these past two weeks.

Brunch is a staple of the weekends in all the colleges, but it’s also a post-run tradition- and a nice way to socialize with the others. Each week a different runner hosts it in a different college, and this week it happened to be Trinity which was… woah. It was a surprise. Already waiting for the others at the Great Gate of Trinity College was a treat.

Quite the meeting place, huh? (Source) 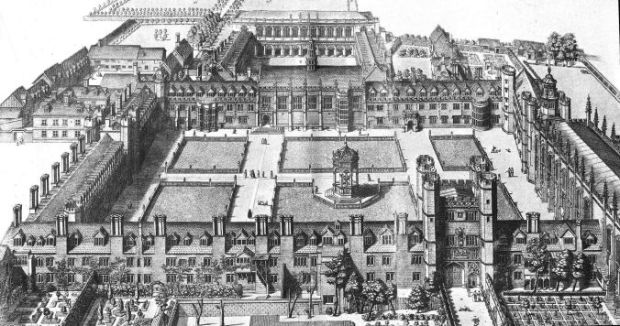 (Source) This will have to do until I make it over back again to take pictures.

But that didn’t even properly prepare me for the dining hall. The founder of Trinity College, Henry the VIII, presided over it and I was getting huge Hogwarts vibes. I could barely contain myself, but I of course had to act cool around the Trinity students and other runners.

Dining hall during the day (Source)

Oh! And because some may find this interesting, brunch in Cambridge can have waffles and/or pancakes, but it also consists of black pudding, eggs, sausage, baked tomatoes, and baked beans. It initially sounds quite odd (and some of the things look a bit off-putting), but you can’t judge it until you’ve tried it! While I didn’t really like the black pudding, I liked the beans. That could become a good, hearty (farty) -ha ha, sorry!- staple.

Having a run at 10 and then brunch at noon means that I didn’t really get started with work until 2 PM, but the nice thing is, if I hadn’t done my shopping yesterday, I would have been able to today- but only until 5 PM. Unlike Germany, England has its stores open on Sundays, but unlike the US, these hours are fairly drastically shortened. On this note, a small comment on the service culture here, which includes all sorts of verbal niceties like “alright there, love?” “cheers.” I still haven’t figured out the appropriate response to “cheers,” so I’ve just been saying it back.

After a few hours of laundry and library (I KNOW; my life is so interesting!), I headed over to the College Chapel for an interdenominational church service. Considering that I’ve been baptized and gone through confirmation, my relationship with the Christian religion has been a bit shaky since high school. Part of it was convenience, and while I know that going to church should not necessarily be convenient, having a chapel on campus is really helpful and I think visiting the Sunday evening service could become a habit. I enjoy the singing of the hymns, listening to the sermon and the choir, the organ music, and the shared dinner together afterwards. 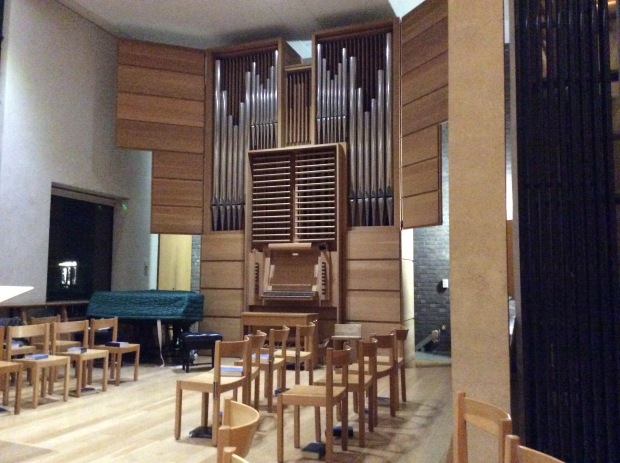 If anything, it’s an hour of introspection and talking to myself, if not to God. Since my college is one of the newer ones, I also hope to make it over to King’s College or Trinity (*swoons*) for a service before leaving here.

Of course, given all the talk about my name in the past week, I had to visit the Dorotheenstädtischer Friedhof yesterday.

The Dorotheenstadt cemetery, officially the “Cemetery of the Dorotheenstadt and Friedrichswerder Parishes,”  is a ‘landmarked Protestant burial ground located in the Berlin district of Mitte’ (Wikipedia) which dates to 1762 and in which many, many famous Germans are buried: Bertoldt Brecht and his wife Helene Weigel, who also happened to live next door to the cemetery, Hegel, Fichte, Heinrich Mann, Arnold Zweig, Anna Seghers, Regisseur Heiner Müller and the Prussian architects Friedrich August Stüler and Karl Friedrich Schinkel, among others. It’s called the “Prominenten [basically VIP’s] cemetery” of Berlin and is located in Stadtmitte (a city district in the center of Berlin) near Oranienburger Tor, which used to be the north entry to a much smaller Berlin. It’s also near the Jewish Synagogue of Berlin and the Bertoldt Brecht Haus. A lot of the cemetery and the chapel were affected by WWII, but the chapel was reconstructed in the 1960s and a dedicated space for James Turrell’s (a US American artist and architect) concepts of space and light since then. It is this chapel my brother and I visited yesterday, having been to the cemetery in the past to appreciate the space and resting grounds of many important German thinkers.

Since being in Berlin 2017, I’ve tried to do something unique to Berlin at least twice a month. Lately, it’s been something at least once each weekend. The past two weekends were taken care of by the Berlinale- Berlin’s international film festival, which featured some really great movies (better, dare I say, than some of the movies up for Oscars tonight).

Directors/actors from the Short Fiction 2 Category 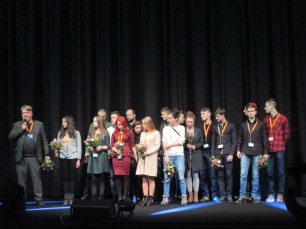 Directors/Actors from Schkola Nomer 3, a Ukrainian documentary about a school in the war zone of East Ukraine.

To just return to those viewings for a second: The really neat thing about the Berlinale was that the directors, producers, and/or actors as well as others involved would be available for Q & A after the movies. The awards ceremony for the Generation group (movies with kids as a main focus) was especially fun to watch.

However, this weekend, I spent a leisurely Saturday morning while preparing for my long run, came back from my long run and felt like a zombie, and decided it was a good reason as any to get some blood pouring through my legs again. I had looked for things to do in the morning, but didn’t really find much except for a play and a few random destinations. So I went for my run.

After refueling with pancakes, I looked again and stumbled upon the “tips for the day” put out by the Berlin event planner thingie (don’t know who’s job it is to arrange these things, but I’m glad they’re there!) and found an event that met my expectations: interesting, I knew where it was located, and it was inepensive- cost 5 Euro reduced entry free.

The event started at 5 pm, which I later found out was so that one could see the chapel during the day and then experience sunset and the effect of the light changes from inside the chapel. Being there a bit early gave me the chance to catch a few shots from outside and surrounding gardens:

After getting seated in the chapel, which was arranged like any other chapel- benches, alter in the front, space in the back for the organ, but otherwise rather spartan, I tried to wrap my head around the unusual lighting. There was a bright blue light coming from the walls, and bright green coming from the alter that while pleasant enough, just seemed artificial. I didn’t feel like I was properly in God’s space. It didn’t help that people were chatting and laughing and on their phones.

But then a member of the parish came up and introduced the space before introducing the curator of the art installation. The young curator told us about James Turrell and his work, as well as his ideas for the chapel. It is an interesting coincidence that the one event I chose this weekend in Berlin had to do with a US American, but it’s also a refection of how globalized we are.

At any rate, I was thrown back to my art studies and how complementary colors work and how lights affect ability to gauge dimensions, and so I was really into the design aspect of the space. Then, the parish member lit the candles of the alter, and I was surprised at how the natural light balanced the artificial light that no longer was unappealing to me anyway. 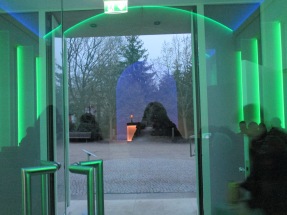 There were some great violets and oranges that I didn’t photograph. Once the prayer was said and the candles lit, the space was mostly quiet and it was a great chance to reflect and let the lights do their magic… and it really was magic.

Leaving the chapel, my brother remarked that what we did was low-keyed for a weekend outing, but it was really nice. It got us a chance to see something unique and participate in a little event that not many knew of or were there for. I know many people who come to Berlin are more interested in the big monuments and events of the city, but one shouldn’t forget the small ones. I guess getting to know them is part of the perks of living in that space, and not just visiting.

For those interested, the event happens every Wednesday and Saturday half an hour before sunset, and costs 10 Euro, 5 Euro reduced for students, veterans, seniors, and those on benefits.