Vincent D’Onofrio in Daredevil (2015) from the IMDB database

A line from Marvel and Netflix’s Daredevil Season One, episode 9 really resonated with me: the moment where Wilson Fisk (played achingly well by Vincent D’Onofrio) states that his one “character flaw” is his inability to quiet the mind. I mean, disregarding the fact that it is not his “one flaw,” I sympathize with his difficulties (though I’m not on par with him being a brutal homicidal guy with messed up ethics). I’ve been pushed by my unquiet mind to finally write this post, in the hope that it will give me the mind-space to deal with some significant life responsibilities. In return, you shall be caught-up on my adventures!

There’s a bit to report from my summer in Germany, but it really came from the last three weeks I was there. I love being a student in Germany. I really do. But one setback is that the semester runs April through the middle of July and once that’s done, there’s not much summer left to overlap with the vacation the rest of my family has. So, most of what I did that was interesting was after the semester had ended and I could take longer trips.

However, I did have a few adventures before that:

Dresden: though I surprisingly took NO photos, it was a very nice two days there. You’ll just have to believe me.

A rose festival: just outside of Hansestadt Rostock, a rose farm finds some people to play some bluegrass and country, some people to sell tea and cake, and then display a vast array of some of the most beautiful roses you’ve ever seen, and if you’re lucky, some available for sale. It was a beautiful day and the music wasn’t bad, so it was kind of cool.

An organ sermon in the chapel to the Kaiser Wilhelm Memorial Church. These happen every Saturday at 6 pm, and while the organist may have improvised a little too crazily, a few classic pieces were played too, and it was a nice respite from the hustle of one of Berlin’s main shopping and tourist districts right outside.

A few bike rides: mostly on the Baltic coast, mostly in good weather and as always with beautiful scenery; the sheep on the roof summarize the vast array of quirky things there are to see up north.

A rose array at a Rose Festival 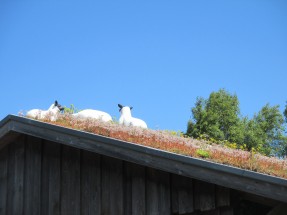 Sheep on a roof

When I wasn’t squeezing in family or friend time, I was finishing up the second semester of PhD colloquium at the Freie Uni and keeping up with my part-part time position as secretary to a secretary.

Once the semester was done, my parents rented a car and we used it to go all the places in the north of Germany. I didn’t go anywhere I hadn’t been before, I but I got to know old places in new ways. Plus, we seemed weirdly attracted to the Hanseatic League, visiting four of the remaining cities retaining the “Hansestadt” moniker in Germany: Stralsund, Rostock, Wismar and Luebeck.

You know you’re in a Hanse city when the harbor hosts a bunch of ships. You know you’ve met a LotRs fan when s/he names his/her boat after Tolkien. Someone must have taken the name J.R.R. Tolkien

For those that want a brush-up on European history, the Hanseatic League was kind of one of the first European Unions. Tired of having to pay taxes or worry about diplomacy everytime a nation’s water territory was crossed, traders, merchants and fishermen agreed that my fish is your fish and saved their tax allotment to build their cities instead. Stralsund we just drove through to get to the beautifully tucked-away island of Hiddensee, and Rostock is the nearest major city of our normal summer haunting-grounds, but Wismar and Luebeck were pleasant surprises in how they’d developed over the last 10 years. Luebeck was especially nice to see again.

Luebeck architecture, like much of the League, was influenced by the Swedish and the vastly popular red brick gothic building style. The Holstentor (top right) and facades of the buildings in Luebeck are very famous throughout the world. I was also enchanted by small courtyards behind almost every house. Fun bonus fact: Luebeck was not attacked during World War II the way other German cities and harbors were because the Allies already knew that they would get that part of Germany as a part of the reparations. They didn’t want to destroy that which they’d later have to occupy.

As mentioned, we also visited Hiddensee (the name does not mean what it looks like it would). There are absolutely no cars allowed on the island as it hosts one of the nation’s largest natural parks and therefore preserves a large number of the native Baltic wildlife. It’s a great island for hiking and I enjoyed walking on the edges of cliffs, eating fish, and seeing a few deer. One gets to the island by ferry and the last one to leave the island was at sunset, so you can imagine the view was amazing. The water was also so still, that at one point, the fine line between earth and sky was almost invisible if it weren’t for a small hint of land. 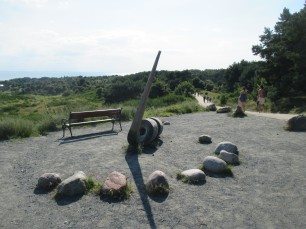 One gets the feeling they do everything old-school here

The weather was not good enough this summer to be motivated to do a whole lot of exploring, so my family did a lot of the same things we do every year, which is sometimes also good.

The time for my parents to return to work and routine was creeping up, though, and now, here we are, back in south Florida and sun and sweat.

However, right before we left, my mother, brother and I visited an art exhibit in Potsdam (that big city outside Berlin, capital of the state of Brandenburg). Called From Hopper to Rothko: America’s Road to Modern Art, I got a good dose of US culture. If you want to get an idea of how Western Expansion weighed on the collective psyche of the US people, consider the change in artwork from the beginning of the 19th century through WWI. While the perspectives excluded a few narratives of racism and genocide, the vitality of America’s frontier mentality- the ability to organize and survive in the face of raw nature, as we see most recently in the Texan’s response to H/TS Harvey, is visceral to the art.

The history of the building where the exhibit was is interesting too. It was sponsored by by operative SAP buisinessman Hasso Plattner. The museum exists on a square that was rebuilt only a few years ago and eerily remove one to a different century. It’s something one definitely does not get in Berlin anymore. Too many new buildings have been built next to the old ones for this kind of impression to be made. Still, there’s a beauty to both.

Check out my mad cloud-designing skills: the Vocation School for Art, Nikolai Church, and Old Market of Potsdam

aaand that’s that. I’m now happily in my parent’s home in Florida, taking advantage of sun, the pool, and the local library. Hope the school year is starting well and fall doesn’t creep up too nastily.