I suppose you’ve been wondering where I’ve been and what I’ve been up to. The short answer is: Germany, school and travel. The long answer is: VDAC seminars, mother visiting from the states, Hamburg, Tuebingen, Berlin, the Ostsee (Baltic), seminar presentations, term papers and catching up with the friends I’ve made in my months here.

Basically, I have a few posts I’ve written during my trips from thither to yon and back again, but I have to transport them from my Ipod notes to the ‘puter. You’ll see them soon, though.

In the meantime, here are some German expressions I’ve heard that don’t have a translation in English, or need some sort of explanation.

Moin- the northern German general greeting for “Hello.” The origin is debatable, but it reaches back beyond 200 years and could have to do with “moi morgen,” with the “morge” of the “morgen” being the part that’s truncated. Egal…  I think it will stick with me for a few months after I get back to the states. Variants include “Moinsen,” and “Moin Moin”

“na?”- this expression comes so often after meeting with a Hamburger, Frankfurter, or many others and having already gotten through the “hallo” or the “Moin” or the “guten morgen.” It’s a sort of question like “well?” I finally got over my irritation after nine months of hearing it and just take it as it is. I found out saying “na” back doesn’t really work. People usually expect some sort of reply like “ja, alles gut,” or something in direct relation, so it’s not even like the U.S. “how’re you?”

Ohrwurm (n)- an Ohrwurm is an ear worm. It’s not something that craws into your ear (sorry for putting that image in your mind) but rather a song or a tune you can’t get out of your head. It’s a handy expression that is much easier to slide into conversation than the longer “I’ve got a song stuck in my head”

“asi” (adj.)- short for “asozial,” this word is used pretty widely in the youth scene (though I’m not sure if I condone it). Its equivalent in the English would be “ghetto” and is used to describe things that are off-beat style, non-mainstream and sort of grungy. The connotations matching it up with “ghetto,” a term I have issues with as well, makes it something I observe from a distance and don’t use myself.

And finally, just for fun, a poem by Joachim Ringelnatz, now one of my favorite German authors/painters:

The Ants
In Hamburg lived two ants who wanted to travel to Australia.
their legs already hurt at Altona, on the Chaussee
And so they wisely decided to forego the last part of their journey.

Of course, the whole thing rhymes in cute couplets in the original: 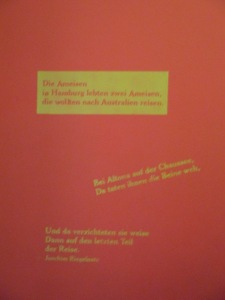 I found this in the bathroom of a Karl’s Erlebnishof, a mix between Crackle Barrel, Disney, and a fun farm. Finally a bathroom worth paying 50 cents to go on